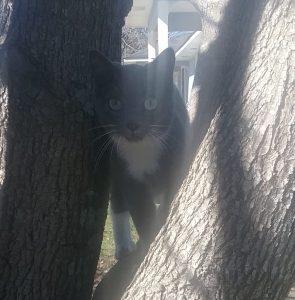 Timmy had a seizure or something about an hour ago. He was rolling around vomiting and pooping all over. Scott got him cleaned up and most of the rest when he just started pooping again. Got him cleaned and got a diaper on him which he removed immediately. So he is confined to a cage until morning.

We aren’t sure what to do about him. We’ve tried to get him adopted out for over a year but no one wants a special needs cat. Especially when it comes to one with bowel problems. We hate to do it but we may have to make him an outdoor only cat. The vet has previously said that there is nothing to be done about him.

Brought to you by:

Secondary owner account. This accout is used as a site member rather than as an Administrator.

Google Map of Kitty-aCATemy (Click on image to enlarge)