MMy home health nurse has a client that had a mom cat and several kittens living under her porch. She was waiting for them to be weaned before bringing us one. She was to bring it tomorrow. I got a call from her earlier. She went to the house and found out that the neighbor dog had killed the mom and all but two kittens about a week ago. The two were still under the porch and the lady was leaving food and water. It has been EXTREMELY hot lately, above 100℉ 35℃ quite often. 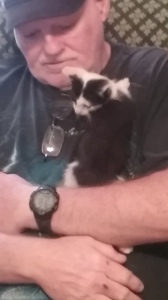 She got one kitten and brought him to us. She will try to get the other one. He is a moo-kitty. We are calling him Ferdinand Magellan. She said he was crying and clawing in the car. I took him and he calmed down and just lay against my bare chest. He was hot, with hot ears. Scott wiped him down with a wet wipe with Lysol since he does have some fleas but it too young for a bath or flea treatment. It is about 65℉ 20℃ in the apartment. We also put the ceiling fan on low.

We gave him some soft food, water and evap milk but he didn’t want any. Probably too hot. We were afraid he might have a problem with his hind feet since he never stood on them and they just drooped while holding him, but we think it’s just the heat. We set him on the sofa and he almost immediately went to sleep.