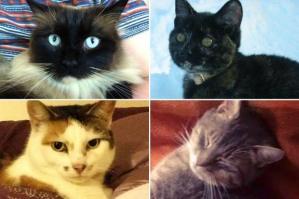 A decapitated cat was found outside the Ashford Community Centre, believed to be the latest victim of the Croydon Cat Killer has stuck again in Twickenham.

According to the charity South Norwood Animal Rescue and Liberty (SNARL) the mutilated moggie was discovered in the borough in the morning of Thursday just off the Staines Bypass.

Both the cat’s tail and head had been savagely cut off, leading the charity to ascertain immediately it was a victim of the vicious killer,

If cats looked like frogs we'd realize what nasty, cruel little bastards they are. Style. That's what people remember.Terry Pratchett
Lords and Ladies

Brought to you by:

Secondary owner account. This accout is used as a site member rather than as an Administrator.

Google Map of Kitty-aCATemy (Click on image to enlarge)